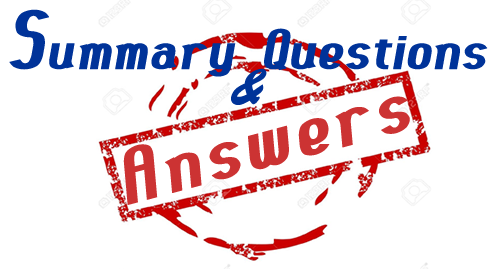 The main ideas in the summary passage were identified by CXC examiners to be the following:

2. Sugar has now become unviable since prices have declined because large global producers have entered the market.

3. Sugar is important, however, because of its ecological impact and because it is a part of the life of a significant part of the population.

4. Caribbean economies have to change because of the WTO ruling.

5. Change will not be easy because it requires money, modernization and retraining.

The CXC English A examiners have also presented three (3) summary answers that are excellent examples of how the summary question on the 2009 English A exam was answered.

Here are the sample summary answers:

1. Although many Caribbean states have abandoned sugar, chiefly because of competition from bigger producers, it remains the most important export crop in the English-speaking countries supported as it is by high prices and preferential trading agreements with the UK and the EC.

In Jamaica, sugar still provides the livelihood for many in almost every parish and is a major foreign exchange earner. It is also environmentally friendly. However, elsewhere price cuts ruled by the WTO have led to changes in the importance and nature of the sugar industry, including the end of production in some cases. The success of this transition will depend on several factors, including European support, investments for modernization and retraining some workers.

2. Although cane production was abandoned in some Caribbean countries, the industry has flourished in others because of high prices and preferential trading arrangements with Europe. In Jamaica, sugar plays a vital part in contributing foreign exchange, in preserving the natural environment by preventing soil erosion and in providing a haven for animals. Recently, however, some Caribbean sugar industries became less profitable as larger countries started to export sugar. In response to this, some Caribbean countries have diversified. Europe’s decision to cut its preferred price, as directed by the WTO, has led to new industries being established, but this kind of change is difficult since European support is required as well as re-training of personnel to do other jobs.

3. Caribbean economies have to reorganize in response to changes in the market economy for sugar. This means modernizing the industry as well as re-training and re-deploying human resources into other areas. The situation is partly a result of a WTO ruling against preferential conditions offered to the Caribbean by Europe, and partly because of the advent to the market of large producers like Brazil and Australia. These factors have made sugar production in the region less viable.

Though some countries chose to stop producing sugar, the Caribbean cannot afford to abandon the industry entirely not only because significant parts of the population rely on it for a livelihood, but also because it is an essential part of the ecological landscape.

While the three answers are not identical, they all have,

1) All the required information

2) They are in the correct format (continuous prose)

Please follow the format of these examples to get high marks on your CXC English A summary writing question.

Wow,this will be of great…

Wow,this will be of great help to my upcoming exams in 2019.